WALLA WALLA, Wash. — Most colleges try to discourage students’ fondness for drink. Walla Walla Community College not only encourages students to enjoy alcohol, it also bottles and sells the stuff.

And for the city of Walla Walla, the school’s courses on reds and whites have made for an unexpected infusion of green, helping turn the local wine industry into the city’s main source of economic growth.

The college’s eight-year-old Enology & Viticulture Program goes well beyond winemaking classes for the weekend hobbyist: It’s designed for students intent on making a living toiling in the vineyards. The 28 courses cover topics ranging from grape viruses and fermentation to “Vineyard and Winery Spanish.” To provide real-world experience, the school set up a commercial winery — the first community college to do so — with its own label, College Cellars.

The program and the graduates it produces have helped buoy this struggling eastern Washington city of 30,000 once known for sweet onions and another big employer, Washington State Penitentiary. Now visitors to area wineries are driving its rebound, and wine students are one reason the population of Walla Walla, which declined in the second half of the 1990s, is rising. The community expects that 15% of its jobs will be created from the wine industry in the coming years. With wineries popping up, busloads of tourists are crisscrossing the area; on many summer weekends, every hotel — from the upscale Marcus Whitman to the Budget Inn — are filled. And community colleges from Idaho to North Carolina are trying to follow Walla Walla’s example to bolster their own wine industries.

The Walla Walla program, which is a two-year full-time course of study, stresses hands-on experience on topics including irrigation, pest control and bottling of the final product. One important, if tricky lesson: Learning how to prune vines properly to maximize their output. Overeager first-year students, instructors say, sometimes do the “Rambo Act,” inadvertently wrecking the plants.

Most of the students arrive at the college with the same dream: owning a winery. Some are just out of high school. One-third to one-half already have a degree — some have two or three — and are changing careers after years as teachers, lawyers or other work in the corporate world. Several students are past retirement age.

During a recent week, a group of first-year students, looking a bit like a prison work crew, spent their afternoon digging through rocks on a strip of land next to a three-hole golf course used by the college’s golf-management students. Their mission: Creating two-foot-deep holes for trellis posts to hold up vines.

“This is the medieval way of doing it,” says Tim Martin, 63 years old, one of three former lawyers in the class. “Not using equipment, you understand it in a different way.”

In another “lab” class, second-year students shoveled pungent, purple grapes out of a 500-gallon steel fermenting tank at the college’s wine center. The grapes were being transferred to a presser, which squeezes the final bits of juice out of the grapes. The center makes about 12,000 bottles a year, but avoids aggressive marketing that would make it a competitor with local wineries supporting the program. Prices range from $12 for a 2005 Lemberger to $25 for a 2003 Merlot.

Tuition for the associate’s degree program is about $3,000 a year for Washington residents and nearly $4,500 a year for out-of-state students. The wine program’s students are in high demand. Walla Walla has about 120 wineries, and students often get their first crack at paid jobs during the annual fall “crush” when grapes are harvested and processed. School officials say graduates can earn $35,000 a year plus benefits as assistant winemakers, and some make as much as $75,000 within a few years.

Students younger than 21 are barred by state law from tasting the fruits of their labor. New York, Florida and other states have sip-and-spit laws for underage students in instructional settings, but Walla Walla officials say they haven’t pushed hard for one in Washington state.

Still, underage sipping occasionally occurs, though current and former students say the wine is promptly spit out. When the tasting starts, “either I leave the classroom or I sit there and smell the wine,” says Patrick Williamson, a 19-year-old student whose family runs an orchard and vineyard in southern Idaho.

The college started teaching students about wine in the 1980s, when Walla Walla’s first winemakers, Gary Figgins of Leonetti Cellar and Rick Small of Woodward Canyon, offered to teach a night class. The college president at the time barred alcohol from the classroom but students quietly brought their homemade wines anyway to share and compare.

Word about the class spread, drawing a backlash from critics who said a public institution shouldn’t be producing alcohol, and that same year the class was shut down. “It was politically not the right thing at that point in Walla Walla,” says Steven VanAusdle, the college’s current president.

Wine classes didn’t resume until the late 1990s. By then, Walla Walla had a handful of new wineries and Mr. VanAusdle was drawing up plans for a center to train students to work at the local wineries. He overcame concerns of state officials by arguing that the wine program could spur the economy of Walla Walla and the rest of the state. “We truly saw the potential of this as an economic development initiative,” Mr. VanAusdle says.

Before long, funds started flowing. The state legislature came up with almost $1 million for start-up costs. The U.S. Department of Agriculture provided $100,000 for tanks. Private money came from across the state to launch the $5 million center. Nine months after the program was conceived, construction started.

One of the school’s goals is to allow students to make mistakes in the classroom so they don’t make them in their jobs at commercial wineries. The strategy seems to be working; Myles Anderson, the wine program’s founding director, says students have done everything from incorrectly mixing two wines to dropping pallets off a forklift.

The biggest challenge, he says, is stressing the importance of sterilization — of tanks, hoses and barrels — which can prevent contamination and thousands of dollars in losses. “You can transmit flaws really quickly,” says Mr. Anderson, who runs his own winery, Walla Walla Vintners.

About a quarter of the students in the program come from other states, and as far away as Maine and Florida. Some are looking not only for new careers but also for a small-town lifestyle. Many also prefer a two-year program to a four-year one; several universities such as California State University at Fresno offer programs in wine production.

Ali Intinarelli, a former UPS truck driver from Bloomington, Ind., used to make wine — five gallons at a time — with a kit at home and give it away as Christmas gifts. She graduated from the wine program last spring and now works at Long Shadows, a winery that produces for seven internationally known vintners.

Some graduates set up their own operations. Jill Noble, a former nurse and one of the program’s first graduates, opened the Couvillion winery on her family’s wheat farm.

Denise Slattery, who worked in marketing in San Francisco, read about the program in Wine Spectator magazine. She and her husband, Steve Michener, a rock-musician-turned-nurse, enrolled in 2004. “We got access to some of the best winemakers in Washington State,” she says. Last year, they and another graduate set up Trio Vintners, a winery that makes 1,000 cases a year from their 1,500-square-foot building in a field near the airport.

The influx of outsiders — some with enough cash to start their own wineries — has some longtime residents worried that Walla Walla may lose its small-town feel. They joke that the only people who will be able to afford to buy homes will be the wealthier enology students coming in. 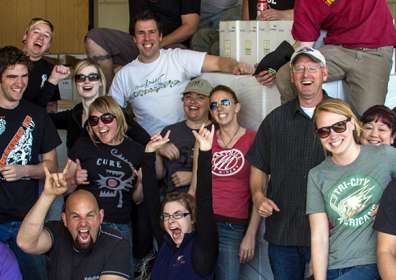 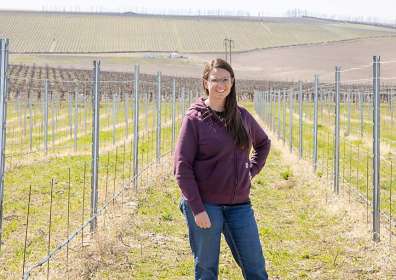 L’Ecole No. 41 recruits Marcus Rafanelli to take over as winemaker